“Let us be grateful to people who make us happy, they are the charming gardeners who make our souls blossom.” ~ Marcel Proust

Wednesday, I spent the day with an old friend from my high school days; Donna and I hadn’t seen each other in thirty years. In high school and junior high school, Donna’s older brother, Arnie, was one of my best friends. After high school I joined the U.S. Army and lived in Hawaii while Donna got a job with the airlines and moved to Pennsylvania. Now, I may not be a fan of social media sites like Facebook, but I will admit they do have the one redeeming quality of reconnecting and rekindling old friendships, which is how me and Donna got reacquainted. 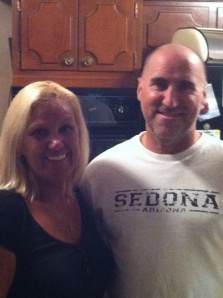 On this day, I met Donna at her house in Erie, Pennsylvania where we chatted for an hour or so, catching up on the lives of people from our common past and rejoicing in the good times we had way back when. Afterwards, Donna took me to a pleasant park resting off the coast of Erie, PA, that’s on a peninsula that juts out into Lake Erie. Presque Isle State Park provides the city protection from inclement weather and creates a natural harbor.
The first stop in the park was a monument dedicated to Oliver Hazard Perry, the great naval hero who just so happens to be from South Kingstown, Rhode Island. He is famous for his exploits in battling Barbary pirates in the Mediterranean Sea, fighting the naval slave trade and as a naval war hero during the War of 1812. He used this natural harbor in Erie to protect his fleet in between the ten consecutive naval victories against the British on Lake Erie; all while only in his twenties! He is a direct descendant of William Wallace (see the movie Braveheart) and is buried in Newport, Rhode Island. 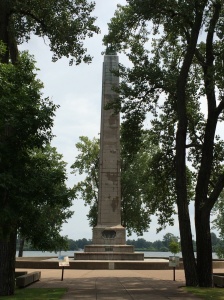 Then we went over to the other side of the peninsula to Lighthouse Beach that, you guessed it, has an old lighthouse there. According to Donna, the water here is usually brown and muddy from constant churning but on this day, probably because it rained torrentially for the past day or two, the water was clear, blue and surprisingly warm. Donna thinks that Canada is around twenty-six miles across the big lake. There are people who swim across from Canada to the U.S. for the challenge, with their passport in a zip-lock baggy. 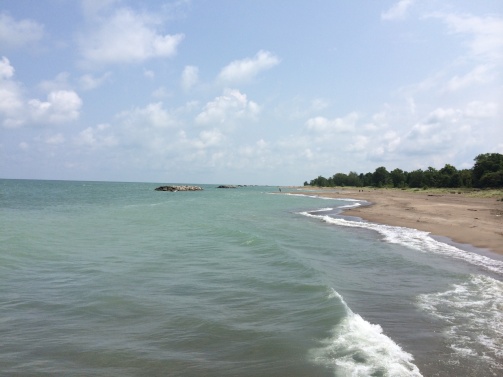 After a leisurely stroll we returned to the opening gate of the park. Just outside the gate is Sara and Sally’s Diner(s). I had read about this establishment before embarking on the Great American Road Trip and, just by coincidence, we had to drive right by here. So, we stopped in. Donna had a salad while I had a couple of grilled hot dogs, which they are famous for; the hot dogs are made locally. 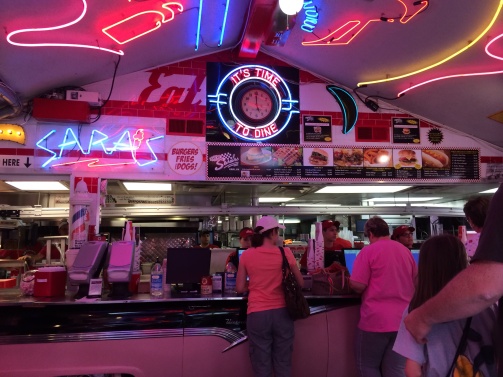 After that we ambled around Waldameer Amusement Park, which was surprisingly like the old Rocky Point Amusement Park that formerly resided on the coast of Warwick, Rhode Island. With a few exceptions, they had all of the same rides from the Flume to the Chair Lift to the Haunted House. They even had the same Music Express! They also just added a new, state-of-the-art wooden roller coaster. I asked Donna if she wanted to ride the roller coaster but she declined. 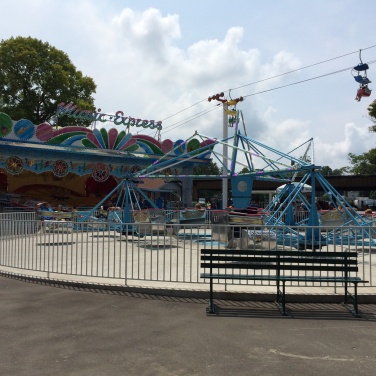 From the amusement park we drove down the street to visit Donna’s husband Rex at his place of employment, then we picked up Donna’s granddaughter, Kylie, from daycare and then relaxed back at the house until Rex got home. We went out to diner at Cab’s Pub, which has a good BBQ menu. Somewhere during our conversations I mentioned to Rex that Donna was too “chicken” to go on the roller coaster earlier in the day. Well, apparently that didn’t sit too well with Donna because after dinner she said, “Let’s go!” — and back to the amusement park we went! We sat in the last car of the roller coaster; on wooden coasters you get the most whipping action in the back. I had my iPhone camera ready, hoping I could, from the top of the first incline, take some pictures of Lake Erie and possibly Canada on the other side. I completely underestimated, what I thought was a mediocre roller coaster. As you can see by the expression on my face in the following picture, which my thumb just happened to push the camera button as the grip of fear overcame me, that this roller coaster was not the kiddie coaster. It had a massive first hill, banks, turns, twists, a darkened tunnel, tree branches and a bridge that takes you over the byway and back! One hand was gripping my iPhone so I wouldn’t lose it ’cause I sure couldn’t use it and the other white-knuckled hand was hanging on to the safety bar for dear life! I got off that ride exhilarated! It was an awesome ride! Donna wasn’t clucking anymore.

*Note: If you ever visit Waldameer Park, you don’t have to pay an entrance fee, you may simply pay for each ride you wish to enjoy. It was $4.50 to ride the roller coaster – well worth it!

Then we went back to the house and said our goodbyes. I was intending to stop at CVS Pharmacy before heading out of town but, instead, I was seduced by a beautiful sunset over Lake Erie. I drove right past the pharmacy, right past the amusement park, right past Sara and Sally’s Diner and went right back to Lighthouse Beach at Presque Isle State Park. The sun through the Cirrus clouds was a blend of gold, orange and red hues; the sand was cool between my toes; the seagulls were gliding back and forth along the shore; the water of Lake Erie was still blue and warm; the rolling waves were lapping against the shore — so I jumped in! It was a wonderful experience — swimming in a fresh-water ocean at sunset! What a great day! So much to be grateful for! The pharmacy was closed when I finally returned. Oh well.

It was a great day spending time with my friend Donna and her family, relaxing, exploring Erie, riding the roller coaster and the joyful sunset swim! Thank you, Donna and Rex, for everything. Until we meet again…!

I hope you have many acquaintances, but only a few good friends that you can grapple dearly to your heart.