“Keep your face to the sunshine and you will never see the shadows. It’s what sunflowers do.” ~ Helen Keller

Monday I drove south out of North Dakota into South Dakota. Along the way I stopped in town…a Prairie Dog town! I’d never seen these little critters before. They were shy and would only pop out of their holes when I was a fair distance away, then they would slink back down if I approached too closely. I was standing in the middle of there “town” and they were popping up and down, all around me; it reminded me of the carnival game, Whack-A-Mole, where you hit the mole on the head with a mallet when they pop up. They were very noisy too, making all kinds of sharp shrills, clatterings and chatterings with tiny little barks in between, a sort of language, in this case used to alert the town that a smelly human was in their midst.
I’ve since learned that their burrows can be fifteen to thirty feet long and five to ten feet below the ground and may have up to six entrances. They have specific burrows for nighttime, cold winter months, listening posts, nurseries for their young and air chambers in a case of flooding. The berms of dirt around their holes protect the burrows from flooding. Fascinating critters. 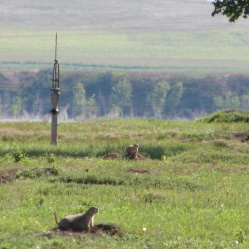 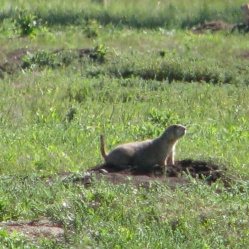 Stormy clouds rolled by all day, threatening, but never producing more than a sprinkle in my path. In the following pictures, to create the pink-toned affect on the clouds and bring out the deeper shadows, I simply put my sunglasses over the camera lens. 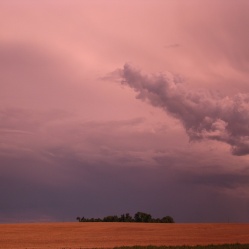 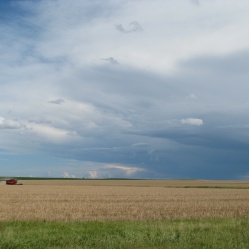 I stopped on the side of the road to get a picture of these grassy knolls because their shape seemed interesting to me.

I noticed this field of cows across the street so I took their picture too. 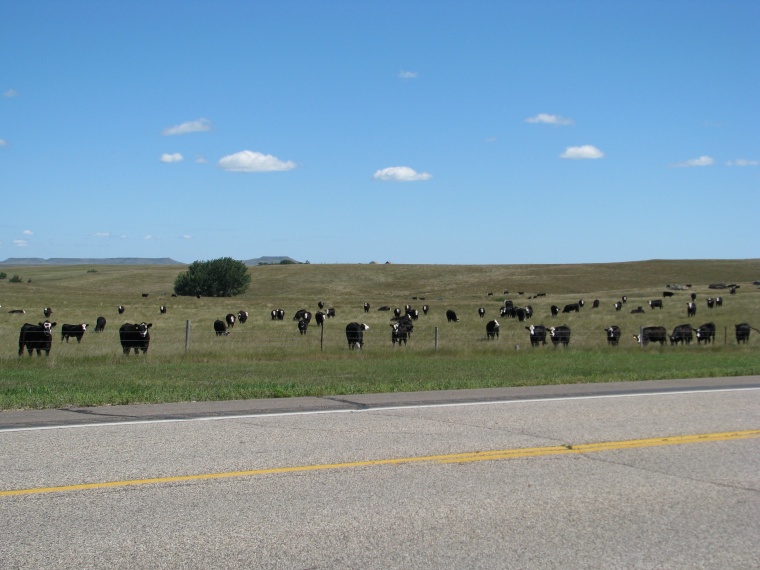 I then took another picture of the grassy knolls. 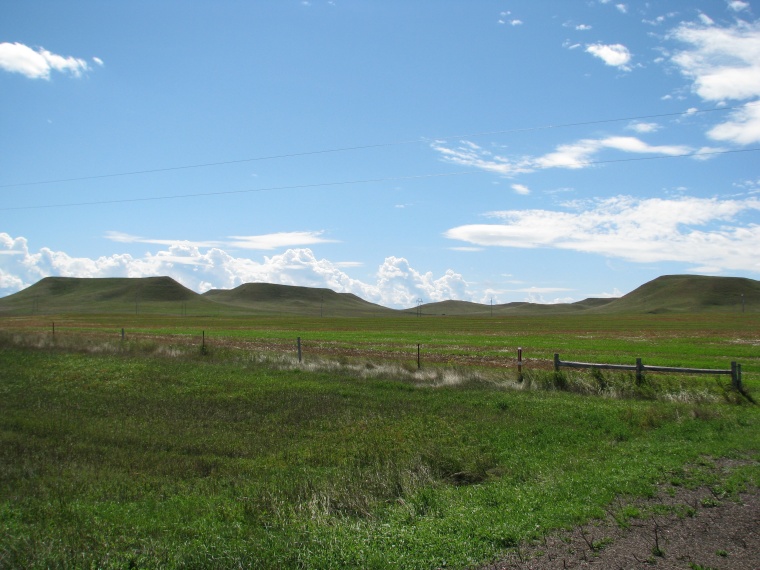 When I turned back toward the cows I noticed some of them had come up to the fenceline, so I took another picture. 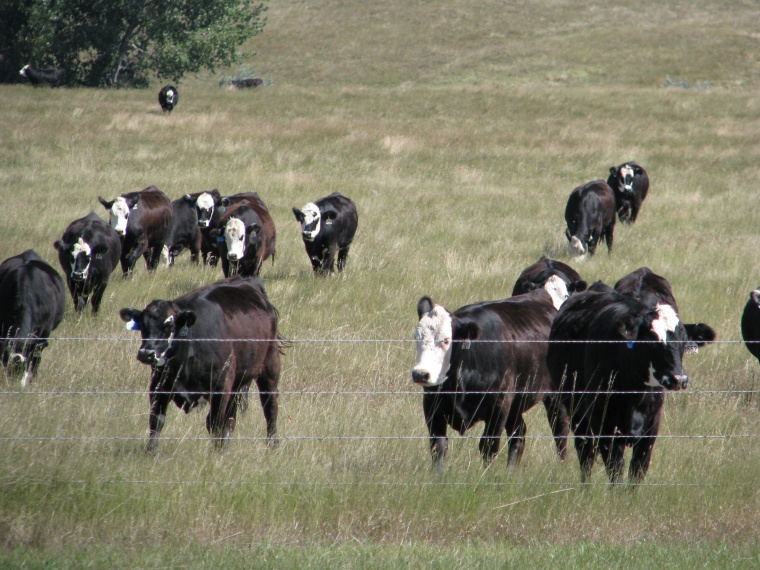 Then I took another picture of the grassy knolls…

…and when I looked over my shoulder to see what the cows were doing…!!!
(Cue the Twilight Zone theme song!) 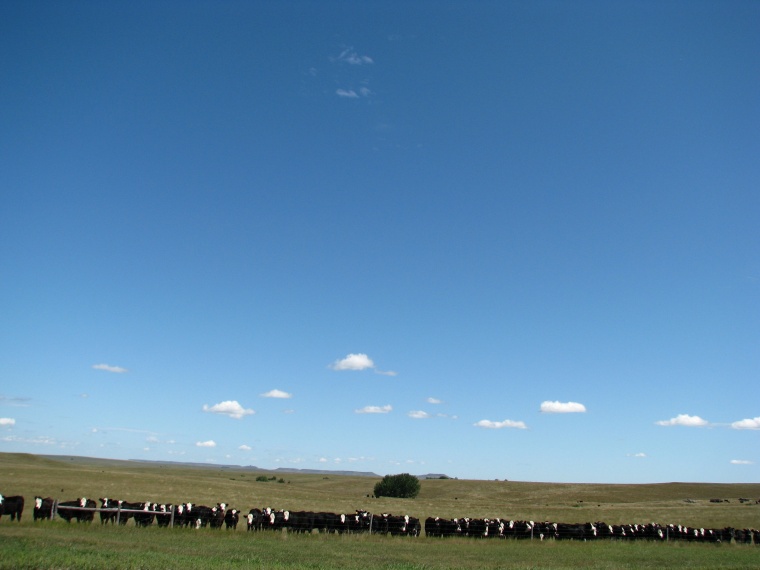 They were ALL lined up against the fenceline!!! 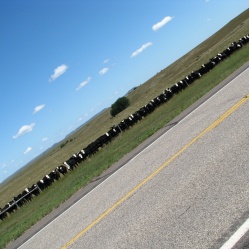 So I jumped in my truck and burned the rubber off my spinning tires before the advancing line of cows moo-ved over my position! Cow-a-bunga, dude! 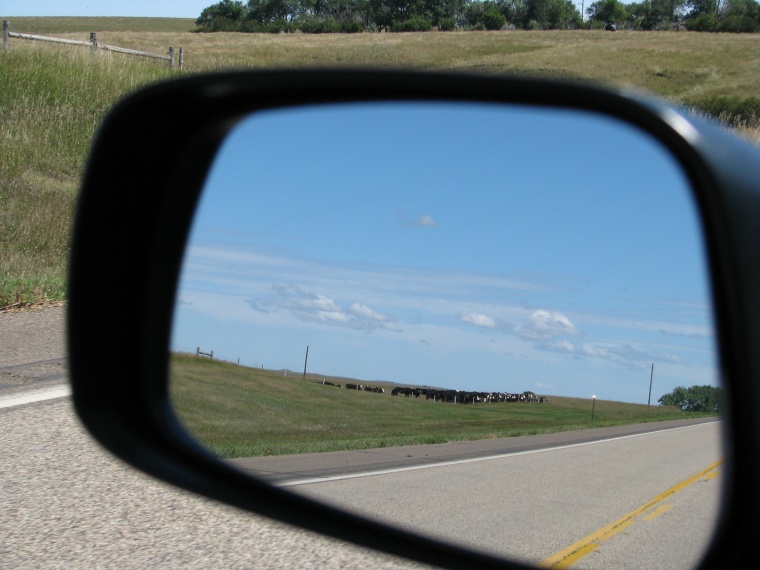 After escaping from that bovine nightmare I continued south and for the next hundred miles, traveling on Route 83, where on both sides of the byway were these beautiful fields of sunflowers. I guess the end of August, the beginning of September is the best time to see them…?

I hope you feel you will succeed tomorrow in whatever you failed at today.